February sees the worldwide release of brand new and updated boxed sets for some of our most popular forces, including the League of Italian States for Dystopian Wars,. Don't miss your chance to get them first!

To place your pre-orders and find out more about these much-anticipated new releases click the images in this newsletter.


Known around the world as the masters of surface raiding, the League of Italian States maintains a sizeable fleet of powerful warships to patrol the Mediterranean. With their bristling turrets mounted atop ornate, arrow-thin hulls these vessels of war make no effort to hide their true nature in battle as they descend upon the enemy like a pack of wolves, circling and outmanoeuvring before delivering the final killing blow. 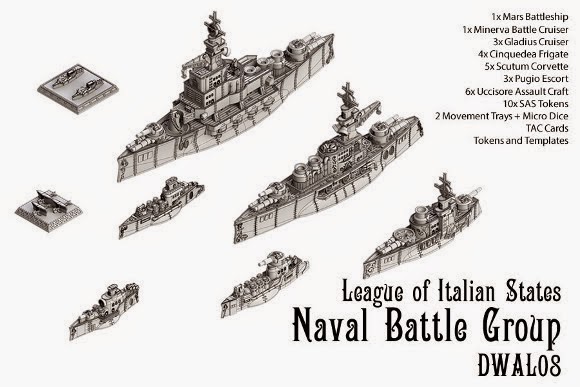 During the refit of its naval forces the League of Italian States introduced a number of new ship types, and also reclassified some existing ships in readiness for future expansion.

Air combat, especially that involving aeroplanes, lends itself well to the individualistic Italian character; one on one, Italian pilots are some of the best in the world.
Zum Vergrößern anklicken....

Aerial mobility makes Black Wolf forces even more dangerous, both as a standalone force or as mercenaries hired by other nations.

1 resin and pewter multi-part, highly detailed Coeus Battle RobotMultiple components allow for either a land or sea-based model to be assembledWhichever option you choose, each comes with a stunningly detailed diorama base